Once, Myogon-ji was a famous Buddhism temple of Shingon denomination, named “Fudo-ji,” which was a training center where many Yamabushis, mountain ascetics, got together from all over Japan.
In 1477 AD, Rev. Nichijo, the 8th chief priest of Ikegami-Honmon-ji, the head temple of Honmon-ji Nichiren Shu denomination, disseminated around here, and dropped in at the temple. He debated on their doctrines with Rev. Zenkei, the chief abbot of the temple. Being very much impressed by Rev. Nichijo’s intelligence and virtue, Rev. Zenkei promptly became his disciple and changed his name to “Nissho.” The temple converted to Nichiren denomination accordingly. In memory of the conversion, they newly built a Soshido, a hall where the denomination’s founder Nichiren Shonin was enshrined. Munafuda, a wooden sign plate staked to the building's ridgepole at construction time stating the building's donor, builder, date and reason for construction of the hall, has been kept until today as a treasure of the temple. Rev. Nichijo was nominated as the founder of the temple and Rev. Zenkei became the 2nd chief abbot.

Then, about 100 years later, Rev. Nittai was nominated as the 4th chief abbot. As he was an extraordinarily literate and virtuous priest, Satomi-awanokami, the feudal load of Kazusa region, became deeply devoted to him. He ordered Masaki-daizen, the lord of Ohtaki district, to rebuild the Soshido and donated it to the temple. Its solemnity and brilliance was incomparable to other buildings. At the same time, he donated large amount of land surrounding the precinct, which raised the temple’s status as high as a lord’s. The chief abbot was allowed to ride a black palanquin with four attendants when he went out.
The old cedar in the precinct was planted when the Soshido was completed and the statue of Nichiren Shonin was enshrined in it. So the tree is over 450 years old.

At that time the name of the temple was changed from Hudo-ji to Myogon-ji. Since then, the temple has been ranked high and adoringly called “Hirasawa-daibo” or “Kazusa-minobu.”

“Otaki-namu-dojo” is a mind training center at Myogon-ji.
Humans become ‘ True Humans’ through practices : gathering firewood, boiling water, cooking rice without electricity, sowing seeds, growing plants and harvesting in the field. It is natural for a human being to labor outside on sunny days and read books on rainy days.
This center was established for people could strengthen their minds and realize the mystery and the wonder of life through practicing above mentioned activities one by one according to our programs at the temple.
We especially welcome people wanting to have a rest from tiring daily lives and youths still growing. 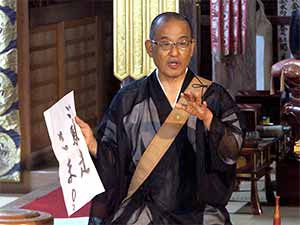 Remarks from Hogyo -Nosaka, the chief of “Otaki-namu-dojo”
“Otaki-namu-dojo” mind training center welcomes as many people as possible, whether they are followers or not.
It is located in the middle of Boso peninsula. It is only one hour thirty minute ride from central Tokyo. And yet, it is surrounded by primeval forests.
As human beings are also creatures living in the nature, they want to put themselves in the rich nature after long stuffy lives surrounded by artificial things in cities. Traffic congestion is crazy during the holiday seasons like ‘Golden Week’ or ‘Bon Festival.’ A lot of people are escaping from cities. I think this phenomenon shows people’s appetite and longing for nature .
Basically, you should practice following the rules at the center, but we respect your own wills as much as possible.
We hope you will refresh yourselves in rich nature and realize the basic meaning of human life through leading an active and brilliant life.